Lewis Capaldi - Someone You Loved

Scottish singer/songwriter Lewis Capaldi has released a moving ballad called "Someone You Loved" on his new EP "Breach" about deeply missing a past love. Over the piano, he pulls at the heartstrings with his powerful and emotive voice and lyrics, singing: "I let my guard down / And then you pulled the rug / I was getting kinda used to being someone you loved". He said on Facebook: "am so so proud of this tune! probably my favourite i've ever written!!!!"

He was recently nominated for the Brits Critics' Choice Award alongside fellow artists Mahalia and Sam Fender, and he joked on Twitter that he'd add the nomination to his Tinder bio in the hopes it may improve his match ratio! If he wins, he'll be joining the likes of Adele, Emeli Sande and Sam Smith. The winner will be announced December 7th when he'll be performing at The Helix in Dublin as part of his sold-out UK tour.

"Love After War" from LA-based producer & rapper duo PANDA$ features striking, beautiful vocals from Anastasia Elliot and superb rap that seems to flow effortlessly between. The track has an icy, cinematic sound with the lyrics telling of a turbulent relationship. The song is reminiscent of ZHU's dance hit "Faded" in parts with its entrancing vocals and echoic production. PANDA$ formed in 2016 after vocalist Manny had surgery on his vocal chords that could have possibly ended his career and ability to sing. Manny felt like this was his second chance and together with Landa they leapt at it. The two pull on their diverse range of influences, from trap and old-school hip hop to 60's soul and Frank Sinatra, giving them a unique creative chemistry.

Five-piece indie pop band Fuzzy Sun have released their sophomore EP "Warm Evening / Cold Morning" and it lives up to their name with lovely sun-soaked synths and lightly psychedelic style. Male and female vocal duets are a special treat in bands, and on "Heavy", Fuzzy Sun do a stunning job with singers Kyle Ross and Daisy Valentine bouncing off each other in the verse and joining together in the chorus. The track jumps straight from the outset into hooky guitar riffs and a groovin' beat giving it an instantly enjoyable, dancey sound. 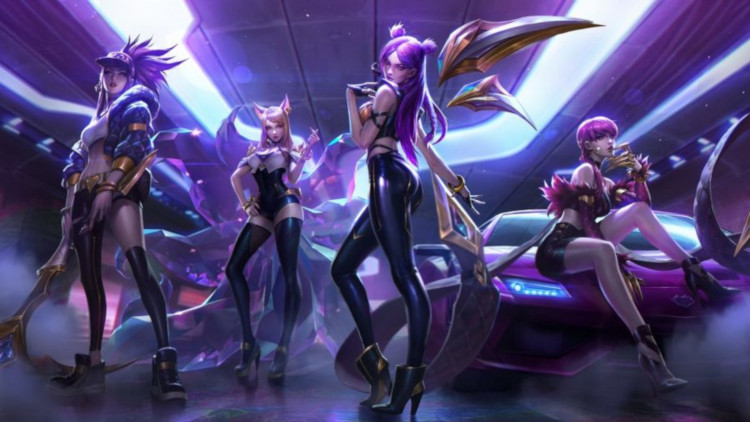 Video game company Riot Games, responsible for popular multiplayer online battle arena game League of Legends, have launched a wildly successful and creative marketing campaign by forming a K-pop group using characters from their game. The group is called "K/DA", likely a reference to the game's kill-death-assist ratio. Each of the four members are voiced by real-life pop stars including Jaira Burns, Madison Beer, and Miyeon and Soyeon from K-pop group "(G)I-dle". They are represented visually in their captivating animated debut by game "champions": Kai'Sa "Daughter of the Void", Akali "the Rogue Assasin", Evelynn "Agony's Embrace" and Ahri "the Nine-Tailed Fox", and the clip has racked up nearly 100 million views on YouTube in under a month! [...]

LA-based band The Regrettes have released a fun new indie pop punk track called "California Friends" about a two women flirting with being more than friends and the insecurities of doing so. It has an upbeat, dynamic style making good use of guitars, drums and backing vocals and shouts. Lead singer Lydia Night told Upset Mag, "I've just noticed how people are so scared to be vulnerable and really admit how they're truly feeling and I have felt that way in the past too. I was just sick of it. I feel like a lot of our songs were extremely personal and I'm a super personal writer, I felt like it made a lot of sense to make that the whole message of it."

Italian producer Matt Strike has teamed up with vocalist Chantelle Paige for their new single "Madness". The track was co-written with Paige who is formerly part of R&B/rap group Flipsyde who actually released one of Strike's favourite childhood music records! Madness has a lovely warm pop sound and an anthemic electronic chorus that would get everyone's hands in the air at a summer dance music festival, and Paige's vocals only take it higher. Strike wrote of the track: "Love is so special that it brings people to madness".

US DJ/producer Third Digit has released a new three-track EP called "Cooldown" full of banging rhythms and bass. The first track "Runnin'" energetically kicks off the EP with tight, fat synths and fun offbeat vocal samples and sounds. "Headshot" has a more minimal drop but definitely puts the "cool" in "cooldown". Backstage has a kind of sneaked-into-the-backstage-afterparty feel to it and you can imagine everyone having a good time jamming out to it. If this is what Third Digit does in a "cooldown", we can't wait to hear him at full throttle!

We approached the talkative producer for comment on the EP, to which he eloquently replied: "Muse asked me for a quote but idk what to say, just let the music talk for me". So there you have it! We'll stop chattering away and you can stream and download the EP here.

Californian band FMLYBND have a come out of hiatus to release their first single in nearly 3 years. Departing from the synth-heavy style of some of their previous music, their new single "Wasting My Time" adopts a more indie rock style built around acoustic guitar. It has a lovely enjoying-life feel to it and catchy sing-along vocals.

Over the past two years the band have "built their own recording studios out of shipping containers in their new home of Costa Mesa, California in addition to launching their own record label through which they will be releasing their upcoming music."

FMLYBND are working on their debut 12-track LP and hopefully "Wasting My Time" is the first of a number of singles to come from it or in the lead up to it!

Two months ago, Norwegian producer Jagsy, alongside fellow producers Vosai and Tom Wilson, released a fantastic remix of Imagine Dragons' "Natural" giving it a harder edge and powerful drop. Jagsy has now teamed up with producers Mike Vallas and Quaggin for their new trap single "Left My Heart In Pain" released on NCS. The track has a big, epic sound particularly with the long reverb tails on the lead synth and snare, and a stormy coldness like a broken heart.

Swedish producer Eastern Odyssey has been releasing a lot of new music since their debut EP "Chapter 1: Genesis" in August this year. Now in November we're already up to Chapter 4, with each EP taking us on an immersive sonic journey and infusing eastern instruments and stylings. The music is mostly instrumental and very cinematic, but Eastern Odyssey has taken a step towards pop by remixing "Let Me Down Slowly" by Alec Benjamin: "Alec Benjamin sent me this incredible song awhile back but I finally decided it'd be a great idea to give it a remix! Hope you all enjoy it, I'm really happy with it :)" Benjamin's lovely voice remains in the forefront, with Eastern Odyssey giving it an airy electronic treatment and tying in a range of fantastic acoustic instruments.